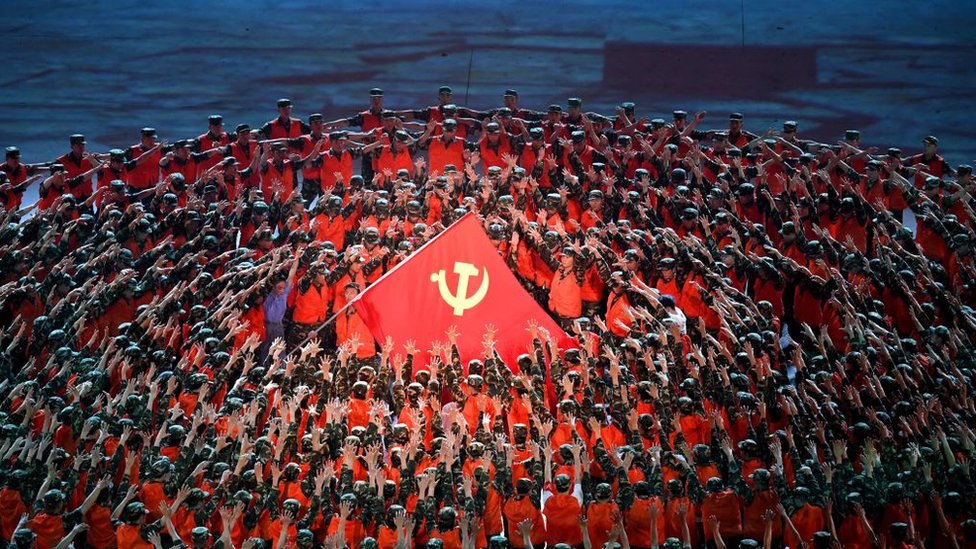 It is no hidden fact that since liberation, our country leaders of Communist Party of China (CCP) have time and again emphasized the ‘dangers’ of exposing our society to Western thoughts of freedom, democracy and human rights – be it Mao or Xi; be it through communiques, movies, dramas, songs, books or novels….“evil West” has and will always be the deepest & darkest fear of CCP…

There is no denying that the reason for contempt and for being wary of the West, is embedded in the hundred years of national humiliation that we faced at the hands of Western powers and Japan…however, should we permit these fears to drive our country? Should this fear of ‘Western culture and ideology’ worry us to such an extent that we wage war against our own? Should this fear be allowed to overpower our judgement? Should this fear be allowed to destroy all the goodwill and love our nation earned in the last 100 years? Should our leaders allow this fear to crumble the spirit of our future generations….unfortunately, we already have!!

Our history gives us enough proof that dissent has played the most important role in our society. Be it Qin, Han, Tang, Yuan, Ming…the fall of each of these dynasty, what was in ancient China referred to as losing mandate of heaven, began when the emperors disregarded public opinion and compelled citizens into submission – the kings who ruled successfully, powerfully and for a longer duration were only those who gave their subjects enough freedom to debate and voice opinions; whereas those who were blinded by corruption, bias and indiscipline often feared the opinions of their subjects and often lost their kingdom to others.

In fact, if one looks at the history of CCP and reason for its win over Kuomintang (KMT), it is easy to realize that the pre-liberation Party was successful, and had the widespread support of the working class, only because it promised freedom that neither Qing not Yuan Shikai nor KMT had intended for the people. However post liberation, CCP was quite different – criticism was met strictly – Mao’s cultural revolution, Deng’s 1989 protest and massacre, protests by lawyers and activists throughout 2002 to 2012, and the very (in)famous surveillance, identification and silencing of dissent in Xi’s era is the unfortunate story of new China.

While paranoia, bullying, and contempt for West has always been a part of every CCP leader since Mao, the unashamed dictatorship, inefficiency and the belligerent attitude of Chairman Xi has suddenly made us a global enemy. And as the internal and overseas Chinese concerns grew louder, instead of rationalizing and resolving, this government has yet again blamed it all on Western influence & in the process of fighting the imagined Western enemy, our leaders have opted a path of self-destruct which is bound to make us lose our all, including our dignity.

The past 43 years since Deng’s Opening Up and 19 years since Jiang’s Three Represents*, while a lot of internal issues existed at least we could take solace in the fact that at least our reputation and our wallets were not suffering. We worked hard and developed technology, we were successfully manufacturing, our culture and arts was getting back its deserved place globally..we were becoming THE destination for business and tourism…but we need to ask ourselves that if in the past 2 years when even countries like France, India, Netherlands and even Russia in spite of their political struggles have managed to gain some goodwill, how and why have we failed? While each of these countries has faced equal amount of criticism for various issues, why has China not been able to survive the humanity test of pandemic? Why in spite of our technologically advanced and well-equipped fleet have our People’s Liberation Army (PLA) forces been ridiculed as “Chinese Fodder” even by our own citizen?

Unfortunately our CCP leaders did ask these questions and instead of finding the right answer, the found an answer that was right only for CCP and not China..they called it “lack of nationalism” and as always, influence of “Western Ideology”.

Do you remember this video? Post CCP’s India conflict in July 2020, as this video surfaced on Weibo, Party’s propaganda dept immediately blamed “lack of nationalism” and “increasing Western Ideology” as the cause of losing to India. However, PLA was neither allowed to investigate internally nor were they allowed to pay homage to our martyrs, instead the CCP government used this as an excuse to further infiltrate and establish command over the country’s Armed Forces.

Under the pretext of “nationalism for the China Dream” and with an aim to block all contact with West, Xi’s CCP government further intensified their anti-West propaganda to implement various ‘reforms’. The past one year, since the catastrophic failure of PLA CCP, every section of society has been under the government’s scrutiny – the very latest ones being the Technology and Education Sectors.

And if one thought it would stop here, here’s what happened next….

About a month back, the Cyberspace Administration of China (CAC) charged the ride-hailing giant Didi Chuxing on the pretext of “data security issues”. What followed the CAC’s charges was the banning of Didi from App-store and discouraging citizen from using the service. In normal circumstances one would normally not be alarmed, however what was extremely prominent was that these charges came barely 2 days after the company’s successful debut on New York Exchange…much like Jack Ma’s (and his Ant Group) in 2020..

Well anyways, it is needless to say that the casualties of this sudden ‘reform’ has not been limited to Didi (or Alibaba) – internet giant Tencent Holding, TikTok’s Bytedance, the food delivery service Meituan, recruitment platform Kanzhun and many more, are facing the wrath of the Party and are quickly reorganizing and adapting to the Party’s guidelines to avoid being slapped with fines or charges of “no data security”, “anti-trust” or “too much capitalism”!

Another event that has every Chinese shaking his head with frustration is the recent, and barely a month old ‘reform’ in the private education and tutoring system.

A few days ago, the Chinese Ministry of Education issued orders that prohibit private tutoring and online training institutes from turning a profit and raising funding on stock markets. Presenting arguments like “increased financial pressure on parents” and “reduce student’s burden”, the Ministry has further warned private and foreign funded education institutions that “those who have violated regulations shall be cleaned up and rectified”.

While superficially these regulations seem justified, the sudden announcement not only shocked the education sector but also shook the Chinese markets. As per the regulations any private institutes teaching “core subjects” will be closely monitored by government, the ‘after-school’ tutoring on weekends, public holidays and school vacations has also been banned by the ministry. What is extremely worrisome is that this sudden tightening of policy has led to mass sackings and diversifying into the non-academic tutoring sector such as art, music, sports etc. Also the majority of students who depended on these institutes for successfully clearing Gao Kao and gaining entrance into various prestigious institutes (as per a 2016 census about 75% of students between 6 to 18 years were enrolled in these institutes) are now left with no substitutes! These ‘reforms’ have ensured that the little exposure that China had to West in the form of English & other Western languages and by extension to that country’s history, culture, arts, music and tradition..has also been completely undone.

Yes, some may argue that the reforms were necessary; Yes, some may even agree with the Party line that “nationalism is only achievable by adhering to Party ideology”; But, one can’t help but wonder about the actual motive, the hasty timing and the real victims of these regulations..the students whose future suddenly looks as dreary as the Beijing air on Monday morning!

As CCP’s propaganda, surveillance, monitoring and fear, has led the Party to implement self-destructive policies, and cause irreversible damage to not only her economy, goodwill but also trust of the people on the party, one can’t help but wonder if the “forced ignorance” will cause CCP to lose mandate of heaven, or if the Party narrative of “nationalism with CCP characteristics” cause the nation to lose track and self-combust, much like eastern neighbor, North Korea? Well, in either case it will only benefit the Xi government to ponder and reflect a little on these lines from JK Rowling’s Harry Potter & the Half-Blood Prince–

“Voldemort himself created his worst enemy, just as tyrants everywhere do! Have you any idea how much tyrants fear the people they oppress? All of them realize that, one day, amongst their many victims, there is sure to be one who rises against them and strikes back..“

* During the 16th party congress in 2002, Jiang Zemin introduced the ideology of the ‘Three Representation’ as per which CCP would represent advanced productivity, advanced culture and the fundamental interests of the ‘people of China’. However, in truth this ideology was aimed to ensure (a) cooperation from the private sector, and (b) control the power/influence of entrepreneurs.

2 thoughts on “Beijing File (I) : The Truth Behind CCP’s Selective Crackdown”