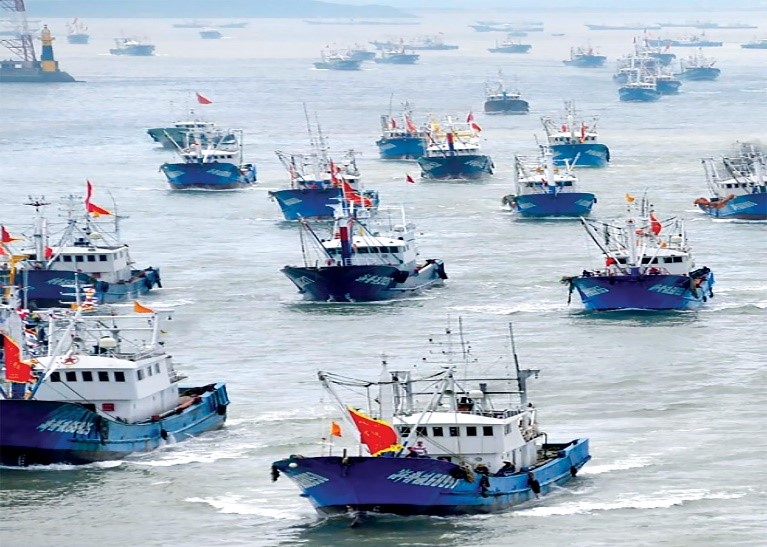 He Jianbin, June 2012, then the chief of the State-run Baosha Fishing Corporation in Hainan province

On 23rd March 2021, the Philippines raised objections towards the presence of the many anchored Chinese fishing vessels (claimed to be part of the Chinese Maritime Militia and often referred to as the Little Blue Boats) around the disputed territory of Julian Felipe Reef in the South China Sea. Now, while the Chinese govt insists on the boats “staying near disputed area to shelter themselves from strong winds”, the weather analysis and the absence of ANY fishing activity by these boats proves otherwise.

This event has now raised plenty of questions for the near future: Should we expect a repeat of 2012’s Scarborough Shoal incident or even the 1995 Mischief Reef incident? Could Xi’s CCP be preparing for an actual war now? Is this event to be seen as a result of the failure of Chinese diplomacy or is this a part of it?

In 1947, impressed by Adolf Hitlers unification of Germany, it was the Kuomintang leader Chiang Kai-Shek who first brought out the question of China’s territory. Drawing a U-shaped “eleven-dash line” map around the territory in the South China Sea, he claimed, that was all Chinese territory. Although Chiang was later ousted from the land, the idea stuck…And left us with this murky and chaotic situation of today.

Today, while CCP defends these claims based on the reign of the Kangxi King (the 2nd Qing dynasty Manchu Emperor), and bases most of its economic, military and foreign policies “to recover the lost glory” from this time , for historians worldwide as well as the arbitration tribunal constituted under Annex VII of UNCLOS (United Nations Convention of the Law of the Sea), this defense seems more as a fiction than fact…And it makes one wonder if the stubbornness on Chinese part just an egoistic desire that needs to be quenched? Is this reason worth going to war with so many countries? How much has this dispute contributed to the stagnating growth of the Asian societies?

Chinese Maritime Militia & its aim “to intimidate, provoke and threaten other nations”

Let’s rewind to April 2012 skirmish between the Chinese fishing boats and Philippines Navy near the Scarborough shoal. When the Philippines troops attempted to board the eight Chinese fishing boats who were illegally collecting corals, giant clams and live sharks, not only were they vehemently opposed but they were also blocked by the Chinese maritime surveillance ships – Zhongguo Haijian 75 and Zhongguo Haijian 84.

This wasn’t the first incident of Chinese incursion nor was it their sole attempt of bullying vessels of other nations, however what was becoming clearly evident with this bold move by China was that since the release of the 1968/69 UN’s report of presence of oil in this disputed maritime region, China’s aggression has become more pronounced and daring. And this event exposed the imminent threat that these boats as part of the Chinese Maritime Militia, posed to the military, economy and environment of the other nations in the South China Sea region.

Using forces like the Coast Guard and the Militia, the Chinese have been able to ensure that their “rights” are asserted and at the same time both these forces are effectively mobilized to pursue traditional military objectives as need strikes.

“…we should train these fishermen/militiamen to gain skills in fishing, production and military operations, making them a reserve force on the sea, and using them to solve our South Sea problems.”

He Jianbin, June 2012, then the chief of the State-run Baosha Fishing Corporation in Hainan province

At present the foreign navies are bound by international maritime laws to protect civilians of all nationalities but in cases like above if these civilians, compelled by Xi Jinping government to be a part of China’s maritime militia, block or hinder in the foreign navy’s operations, who will protect them from becoming the unwilling causality? Won’t they become just another chess piece in Xi’s expansionist games? Will the CCP government protect them and ensure pension provisions for them and their families if they were to turn casualties of any future skirmishes? Or will they also be forgotten and buried discreetly like most of the PLA army men.

While the Chinese cite folklore, myth, legends, history to camouflage China’s economic interest in these maritime disputes, the pending resolution of the South China Sea dispute along with the increasing accidents and minimal electronic transmission of the maritime militia vessels not only pose a threat of damage to military and para-military vessels of neighboring countries but has cast a grievous shadow of doubt on Chinese civilians working and residing all around the world…thus making one ponder on the extent and depth of the “Party controls all” narrative of CCP.