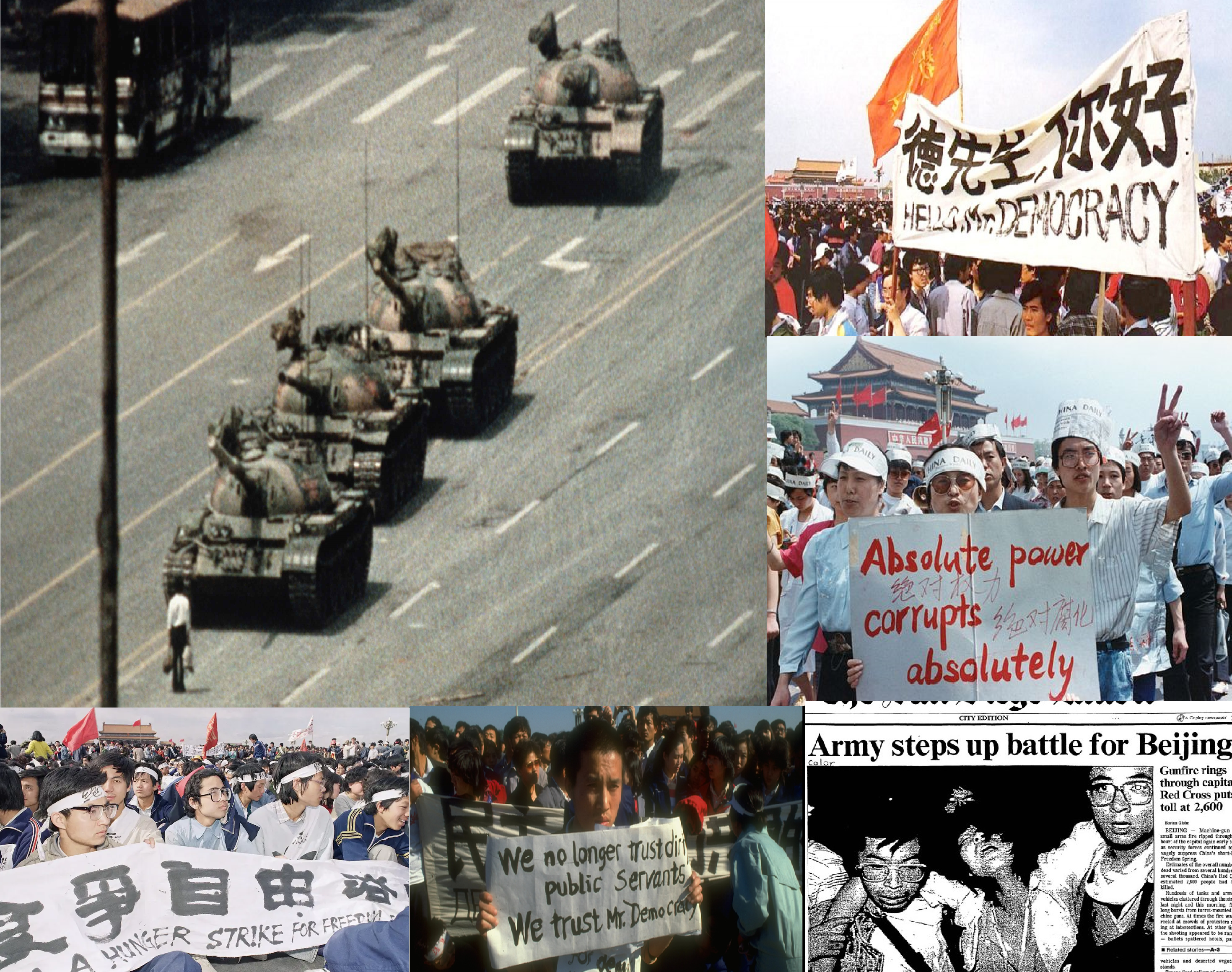 Enthusiastic leaders were addressing an emotional crowd – some pacifying, some urging for action. Surprisingly, the protagonists of this movement weren’t all that new..young students, yes, much like those who had gathered and protested in this very Square, in 1919 (against the feudal society) and during the Cultural Revolution of 1976. However, the cause of this gathering (and many similar ones all over China during this time) was unlike the previous movements. This time it was a cry to put an end to corruption, nepotism and “elite dominated form of capitalism” (as quoted by Barry Naughton). But the most important demand was to shift from communism, to become a democracy.

As the students waited in hope for an audience with the government, they were left with much disappointment. Instead of dialogue and discussions with the young teenagers, the Communist Party employed the State military to violently halt the protest and thereby the hopes of these students, forever.

There were military tanks thundering across the road, armed troops killing and arresting protesters, buses burning on either side and people screaming and running in all directions…And with this, the 1989 Pro-democracy movement was silenced with force.

This year was 1989. The place was Beijing. This movement was one of the bloodiest & heart wrenching student movement in the history of the world.

However, within China this story was re-written, as if the incident never happened, as if the thousands of young, promising students had never died, as if the jailed protesters had not existed, as if the ‘Tiananmen Mothers’ had not lost their children..as if all was well…

…the massacre was just forgotten…as if it had never happened.

32 years since, even though the brutal event was covered up, its impact on the Chinese Communist Party (CCP) and therefore on modern China, remains quite profound. Every policy, every decision, every directive, every step is now scrutinized through the lens of 1989.

To wipe out the urge of dissent and to promote ‘patriotism with CCP-permitted characteristics’, the Party has rigorously promoted programs like Young Pioneers and Communist Youth League of China. These programs ensure that generations of Chinese children grow up Sinicized and heavily appreciative of the Party. Additionally, the content of school and college textbooks has been altered to bear no references to any event that humiliates the CCP, much like the ‘89 Democracy Movement.

The seeds of fear sown by the democracy movement of 1989 was such that surveillance and censorship became ingrained in the Party work culture. Communiques warning citizens of the evils of the Western ideals (such as human rights and democracy) have been regularly issued and propagated through different mediums. Links to foreign media platforms, foreign brands, western music and movies etc have been restricted, and even those that are allowed are carefully scrutinized and expected to religiously follow Chinese laws. Chinese citizens are not permitted to use foreign social media platforms, in fact even on Chinese SM platforms like WeChat, Weibo, Bilibilli, Duoban etc discussions on politics, military, human rights, Mao Zedong, Tiananmen Massacre, Cultural Revolution etc are forbidden.

In the recent case of a 38 year old blogger, Qiu Ziming, was found guilty of “slandering heroes and martyrs” by CCP, when in fact, all he did was to comment that the actual death toll in the China-India clashes of 2020, might actually have been “higher than the official count given by CCP”. Besides being jailed, Qiu was banned from Weibo, where he had more than 2.5mn followers.

Power is in tearing human minds to pieces and putting them together again in new shapes of your own choosing.

The Chinese government has till now been quite successful in using initiatives like the Social Credit System (which monitors and assesses every citizen’s financial, cyber, political, religious and social footprint, and warrants them awards and punishments accordingly) and the disputed National Security Law (under which various pro-Democracy Hong Kong activists and politicians have already been arrested) to camouflage ‘fake news’ and propaganda. Their high handed and aggressive strategy to deter anyone abandoning the Party mandated path, including foreign nationals residing in China, has also prevented people from voicing out their frustrations. But, it takes just one look at Weibo and one conversation with a common citizen to understand that the forced calm is about to shatter soon.

So, as the Carrie Lam’s puppet government and Macau use the pretext of pandemic and National Security Law to banish museum displays, cancel candlelight marches and impose heavy fines and penalties on anyone who pays homage to the ’89 victims (all the while as the government promotes mass gatherings for art exhibitions and music concerts), they should realize that it is only a matter of time when the voices of discontent and pro-democracy spread like wildfire, from Hong Kong and Macau to the whole of China.

Because unfortunately CCP did not learn one major lesson from 1989, that is –

Stifling and locking up dissenters does not reduce dissent – it fosters it.

5 thoughts on “EXPUNGED FROM CHINA’S MEMORY: STORY OF THE TIANANMEN MASSACRE”