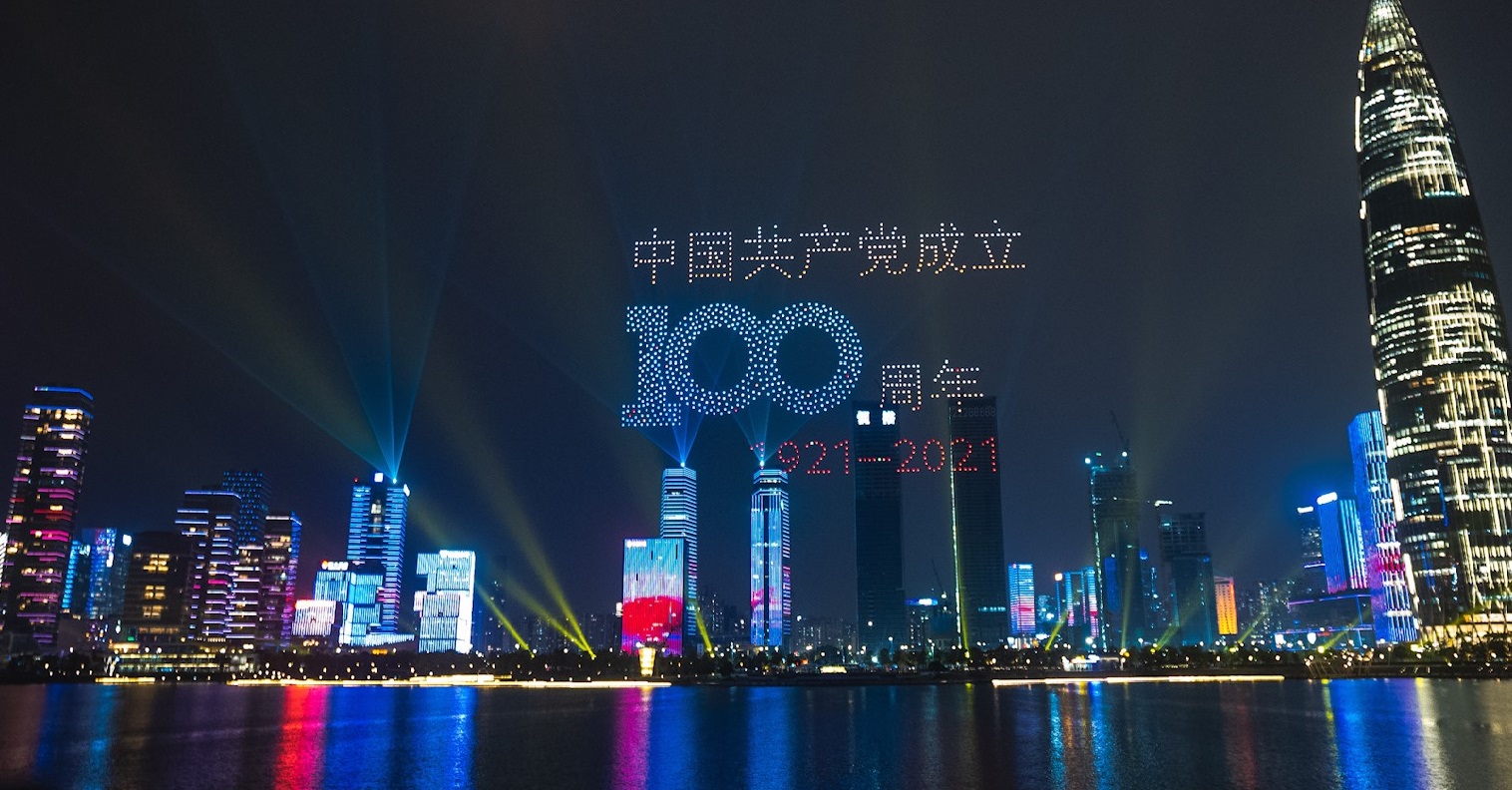 Without the Communist Party there is no new China

In July 1921, the 12 men who were secretly meeting in a French building in Shanghai, might not have realized that they were about to leave behind a legacy that would last for 100 years, or that the Party they officially established that day, the Communist Party of China (CCP), would end up becoming the longest ruling communist party of the world, or that theirs would be a communist party that would fare better than even USSR!! Not they, nor the world could have foreseen how far the CCP would come…

But the journey of CCP hasn’t been a smooth and easy ride – struggle for liberation; small but ambitious beginnings of a new nation; devastation caused by Mao Zedong’s Great Leap Forward and his war on dissent; Deng Xiaoping’s determination for economic reforms and nation’s upliftment; student’s protest for democracy and freedom, massacre at Tiananmen Square by Deng’s army; Jiang Zemin’s support to private sector & China’s backlash thereafter; Hu Jintao’s struggle with corruption…and finally Xi Jinping’s desire for complete control…the last 100 years of CCP’s reign have been as dramatic as the story of China itself.

Last week on July 1, China celebrated the 100th anniversary of Chinese Communist Party – and as the performers sang songs like “Socialism Is Good” and “Without the Communist Party there is no new China”, eternal Chairman of the new CCP, Xi Jinping, proclaimed warnings and issued strong threats to “any foreign forces [who tries] to bully, oppress or enslave” China.

But through the entire July 1st celebrations, one couldn’t help but wonder – if Chairman Xi and his brigade of ‘wolf warriors’ have completely isolated China from the rest of the world? If in pursuit of economic growth, the new generation of CCP has lost its way and turned into a bully instead? If the new CCP has in its attempt to promote ‘communism’, created an authoritarian government controlling every aspect of the Chinese society? If, now, Party’s interpretation of ‘nationalism’ is measured in terms of loyalty towards the Party..and that alone? If this new CCP has created a society of fear, oppression and intolerance in China?

Well, it does make one wonder…

Down The Memory Lane: Story of CCP in the last 100 years

There is no doubt that China, post Mao’s disastrous Great Leap Forward, rose like a phoenix – with visionaries from CCP like Deng Xiaoping, guiding the country towards economic reforms and Jiang Zemin, understanding & ensuring the support of private sector and global markets – China’s economy improved exponentially. However, this economic growth came at a severe expense…freedom of citizens.

Throughout the history of China, development and oppression have always come together – be it in 1978 when the government brutally suppressed the movement for ‘the Fifth Modernization’ (a famous article that argued for the importance of granting freedom and empowerment to achieve actually progress); or be it the 1989 student’s pro-democracy movement which led to the unfortunate Tiananmen Square Massacre of June 4, 1989; or the events during the Hu Jintao’s administration (2002-2012), when the State started repressing and harassing human rights lawyers and religious practitioners, especially post the 2008-2009 riots.

However, it was only in 2013, that China and CCP’s fate was to undergo a drastic change.

Reign of the new Chairman: Xi Jinping and his ‘China Dream’

In 2013, as Xi Jinping took over the command of CCP and China – the first thing he did was to educate every member of CCP on USSR’s failure at communism through a series of secret screenings of informational documentaries and various internal documents like Document 9. Should you ask why – It is quite possible that by this time Xi and CCP had realized that the younger Chinese society had finally understood the importance of freedom and was, unlike previous generations, ready to fight for it. Thus, what followed after Xi Jinping took over as the Chairman of CCP and Central Military Commission, and President of China, was the increased involvement of the Party in every sphere of life – to ensure that “Party controls all” was now Xi’s singular motto.

To maintain Party loyalty, not only did Xi declare himself the eternal leader (by removing the clause of maximum 10 years term which was designed by Deng Xiaoping) but he further consolidated his political power by enshrining his name and political ideology in the Party’s constitution – elevating his status to the level of former leaders like Chairman Mao and Deng. He further ensured that his opponents and any dissidents within the Party were instantly weeded out and silenced by bogus charges and questionable trials – business tycoons, artists, actors, influencers, writers and journalists were scrutinized with a hawk’s gaze, even their movements in cyber world were not spared.. With time these restrictions and censorship have been legalized to such an extent that any comment on “hazards, epidemics, disasters, and situations involving police” that is deemed unsuitable to CCP or the supreme leader, is conveniently denounced as “fabricating false reports” and immediately results in criminal charges/detentions/jail-time. In fact, the list of forbidden topics has now increased to include public health and safety, Covid-19 pandemic and its source, economic policy, media censorship, civil society crackdowns, comments on PLA and disputes with neighbors, and the Party’s reputation and everything associated with it.

Not limited to censorship, the Party’s propaganda department, United Front Works, under the leadership of Xi, has intensified the narrative of ‘nationalism’, and ‘suffering at the hands of the Western devils during the hundred years of humiliation’. The intention of this is to bind the people through a shared sense of loss and suffering, and ultimately ensure an everlasting support to the Party.

– Xi Jinping on July 1, 2021, during the celebration of the 100th Anniversary of CCP’s foundation

But what is CCP’s motive behind fueling such sentiments? Well..these sentiments combined with censorship programs and laws like Social Credit System and National Security Law, (1) compel the citizens to think only as desired by the Party and no more, and (2) divert the attention of people from the internal issues like human rights violations, ethnic discrimination, misuse of law and order by government and representatives, increasing crime rate, corruption, gender bias, food crisis, military affairs and treatment of soldiers by government etc.. Thus, keeping at bay any criticism that could disturb CCP’s existence and power.

What lies ahead for the Party?

It seems almost like a dream when one remembers the popularity with which China once ruled the world – it wasn’t just a popular country to invest in, but also widely popular among tourists, students, researchers and entrepreneurs. However, in the past ten years the CCP government with their intimidation and harassment tactics have not only obstructed foreign journalists and businessmen – take for example the case of banning BBC or Hua Chunying inciting boycott of companies like Nike and H&M who raised voice for Uyghur Muslims – but the Party’s aggressive attitude has made them stand alone (barring a few debt-ridden countries like Turkey, Pakistan, Cuba etc) and on the wrong side of history.

As CCP ignores all voices of reason from within its society and abroad, while adamantly pushing forward with its unchecked expansionist dreams, one can’t help but feel that the era of China’s glory of Deng’s, Jiang’s and even Hu’s time..is long gone…and what lies ahead is the road of solitude and authoritative reign quite similar to Mao’s time – leading us to wonder if Xi will leave China the same way Mao did – in huge economic distress and triggering social instability.

Not so surprisingly an excerpt from George Orwell’s 1984 crosses my mind, & yet again leaves me with millions of questions and thoughts –

The Party seeks power entirely for its own sake. We are not interested in the good of others; we are interested solely in power, pure power…We are different from the oligarchies of the past in that we know what we are doing. All the others, even those who resembled ourselves, were cowards and hypocrites. The German Nazis and the Russian Communists came very close to us in their methods, but they never had the courage to recognize their own motives. They pretended, perhaps they even believed, that they had seized power unwillingly and for a limited time, and that just around the corner there lay a paradise where human beings would be free and equal. We are not like that. We know that no one ever seizes power with the intention of relinquishing it. Power is not a means; it is an end. One does not establish a dictatorship in order to safeguard a revolution; one makes the revolution in order to establish the dictatorship.

10 thoughts on “CENTURION APPLAUSE BUT ARE THERE CELEBRATIONS AHEAD??”